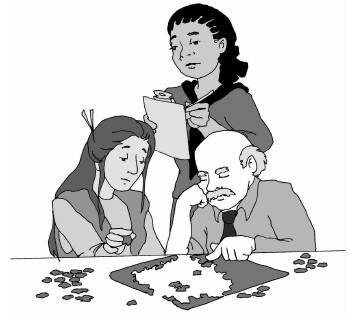 This is a great activity to encourage your team members to work together to generate ideas, organize them, build a consensus to selection, and take action. Use a space large enough for groups of three team members at each table for assembling a small jigsaw puzzle. Allow about 20 minutes for this exercise.

Have the following materials:

Tell the group it will be modeling a typical team process of generating information, organizing that information so the team can select one or more options to act on.

Ask people to group themselves into teams of three; two people will be putting the puzzle together while the third person will observe the process.

Hand out one puzzle to each team. Tell the teams “The goal is to assemble the puzzle and for the process observer to record how the teams put the puzzle together. For example, the first step is to open the box.” Encourage the observers to take notes and assure the teams that this is NOT a competition.

Allow the teams to complete the puzzle. Cheer when each team completes the puzzle.

When all teams have completed the puzzles, debrief the activity by asking the process observers, “How did your teams put the puzzle together from the starting point of opening up the box to when the puzzle was completed?” (While you are giving these directions, write “open box” at the top of the easel chart and “puzzle complete” at the bottom of the easel chart.)

Ask for one idea from each observer, and with a large marker, legibly write each idea on a large Post-It® note. Place the Post-It® notes on the easel chart, with all the “generation” ideas toward the top, “organization” ideas toward the middle, “decisions” in the lower half and “take action” on the bottom. Place communication issues along the side of the easel chart. Depending on the level of detail and number of teams, the group will identify ten to fifteen steps in the process.

(Note: This models the “generation” of information – specifically the steps to assemble a jigsaw puzzle. By placing the Post-It® notes in pre-determined categories, you are “organizing” the information into categories, as well as into a flowchart.)

Congratulate the teams on “generating” many steps to assemble a jigsaw puzzle, which you have posted on the easel chart. Point out the similarities to “brainstorming” – which is the primary tool used to generate information.

Reinforce the analogy that teams generate ideas, organize them, select what needs to be done and then take action – just like teams put a puzzle together.

Using the team’s Post-It® notes, compare the notes to the process that teams use to:

Debrief and Summarize
Point out the different ways the teams organized their pieces (by color, by picture objects, corners and sides). Draw the parallel that many teams organize the information differently, depending on the subject. They might make a flowchart from one point to another, prioritize it by importance, sort it into categories, place it on a timeline, etc.

Point out the subtle ways that teams are always making small decisions – often times without verifying that the team has made a decision! Ask the group how they made decisions while putting the puzzle together – relying on the “puzzle expert,” the loudest voice, a majority vote, or a consensus. Discuss the different ways teams make decisions and quickly move into action.

Finally, debrief the communication flow – checking with each other, referring to the goal (the picture of the completed puzzle on the box), as well as roadblocks to effective team communication.

From your specific observations as well as the discussion, summarize the key learning’s from this activity.