Building up the JSConf Community 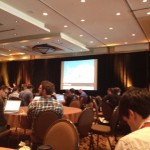 For the last two days, I hung out with 400 incredibly cool Javascript programmers at the JSConf 2012 in my new hometown of Scottsdale, AZ.  I spoke on the second day, so I wanted to get a feel for this conference and the attendees – especially since it sold out within 30 minutes of the registration opening up without an agenda or speaker list!

The conference curator, Chris Williams started JSConf four years ago and decided to throw out all the things he hated about conferences.  He built JSConf centered around 15 and 30 minute presentations about leading edge technologies, best practices, and cool stuff the JS community needs to know.

The content is awesome, the location is hot, and the beer keeps flowing – so what’s not to love about JSConf?  In fact, it has been soooo successful, the conference has been replicated in Europe and is going “down under” in Australia later on this year!

Imagine this: back to back powerpoint presentations about coding…people flowing in and out of the two ballrooms, or hanging out in the lobby hacking their new Boot to Gecko cell phones, happily donated by the folks at Mozilla.  (Why not tap into the brilliance and influence of the JS community to help build the open source infrastructure and apps that people will use? Makes perfect sense to me!)

The presentations that received a standing ovation (there were three standing O’s!) moved well beyond lecture mode.  While each had different styles, they all used relevant stories to illustrate their points, added a little levity and created a connection with the audience.

Visuals are a big part of JSConf with each presenter bringing their laptop to the lectern, plugging it in and starting their presentation.  The screen is in the center of the room with the lectern positioned downstage right, so most of the presenters were confined to talking to the left side of the room!  You know how this drives me crazy…..the screen should be stage right with the presenter able to use the entire riser to connect with the audience.  However, I understand WHY the screen is in the center of the stage.  Have you ever tried to read itty bitty code on a large screen?  Dual screens might have solved this problem…but I digress…..

In keeping with the idea of being on the leading edge, Chris decided to have me speak in the afternoon of the second day.  Talk about doing something different!  For a day and a half, the audience had been bombarded with Powerpoint – and I walked on stage and the screen was (egads!) dark.  Although I was competing with the opening of the beer keg and the lack of a bathroom break for two hours, we had about 100 people engaged in a mainstage conversation – a large group conversation about how we can change the world and build up the JS community.

I also projected the twitterstream and asked the audience to comment via twitter as well.  Here are the top ten comments on what they had to say:

Perhaps this list can serve as a community credo – building up the JS community to truly change the world!