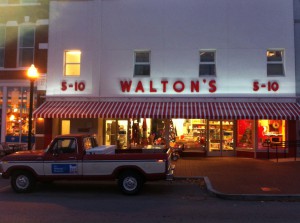 This past week I had the pleasure of working with a client in Bentonville, Arkansas, the birthplace of Wal-Mart. While there, I was not only able to visit the first 5 and 10 store he purchased, but also toured the Sam Walton Museum. Sitting there is still the old beat up 1974 Ford truck he drove until he died.

When asked why he did not purchase a better vehicle he said; “what am I going to haul my dogs around and go hunting in a Rolls Royce?” He was humble, kind and very “frugal”, which was a winning combination while building his retail empire.

When you stand in front of that little store, where they still sell some 1950 items at 1950 prices, it is hard to imagine how this became a multi-billion dollar, global retail business. Of course there are many reasons, but it was the respect with which he treated people that made the difference.

Another major factor was his mindset that whenever he purchased anything, he searched for the lowest possible price. He also applied the same approach in business, and passed on the benefit of that low cost to his customers.

With his workers, he maintained a management principle that “leadership is service”. It is not about controlling others. He believed that no (one) person can build a strong organization; it takes a team of dedicated individuals. So he focused on hiring the right people, providing them with appropriate training, including the subject of ethics. They even have an award for associates who demonstrate high integrity in their work.

He relied on his employees to give customers the great shopping experience that would keep them coming back. To enable this, Sam shared his vision for the company with associates in a way that was almost unheard of in the industry. He treated them as partners in the success of the company, and firmly believed that this collaboration was what made Wal-Mart great.

Very early on he established three values: 1) Respect for the individual, 2) Best customer service, and 3) Strive for excellence.

In his acceptance speech after receiving a Medal of Freedom from President George Bush he said: “By working together, we can lower the cost of living for everyone in the world.”

He made his business more about people — his managers, his staff and his customers. From the beginning, Walton surrounded himself with the kind of individuals who had the courage to take risks, make mistakes and were not afraid to come up with new and different ideas. Wal-Mart has been guided by leaders who constantly inspire people to strive for greatness.

“Wal-Mart associates are the heart of our business,” Sam Walton said, “Our people make the difference. We’ve worked hard to build an environment that emphasizes respect, integrity, innovation and open communication. Whether it’s a part-time job or the career of a lifetime, working at Wal-Mart means great opportunity for those who are willing to work hard and produce results.”

Outstanding leaders go out of their way to boost the self-esteem of their personnel. When people believe in themselves, it’s amazing what they can accomplish. Sam took a personal interest in each staff member he encountered. He wanted them to know that they were important to the organization and its success.

My question for managers this week: “What do you do to increase the self-confidence and personal esteem of your staff to make them feel valued and encourage them to give that extra effort to ensure the success of your organization?”