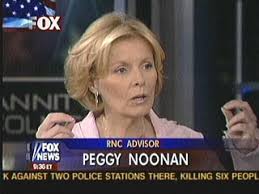 Or so says Peggy Noonan in a Wall Street Journal article this weekend.

Contending that “the speech as a vehicle of sustained political argument was killed by television and radio.  Rhetroic was reduced to the TV producer’s 10-second soundbit, the correspondent’s eight-second insert, ” she asserts that the Internet is restoring rhetoric as a powerful force to connect with the American public.

Why?  Because anyone can go online and view the video and or a transcript of the speech and see for ourselves what was actually said.  Noonan points to two cases: Gov. Mitch Daniels and Gov. Chris Christie, as well as the plethora of speeches on YouTube and  TED conference speeches.

She exhorts our politicians to “settle down, survey the technological field and get serious.  They should give pertinent, truthful, sophisticated and sober-minded speeches.  Everyone will listen.  They’ll be all over the interwebs.”

Wish I could be so optimistic.  We still live in a Twitter-world where everything is boiled down to 140 characters to get the public’s attention – in order to inspire then to search for more meaning.  Why would I want to listen to a sober speech if there isn’t something that grabs my attention?

Sorry, Peggy.  I usually agree with you, but in this case, I think you need both.  The substance AND the sizzle.

What do you think?  Take our monthly poll just to the right of this posting!