Are Your Presentations Just “Hairography”? 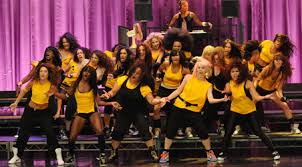 I’ve been having a Glee marathon – Season One with four DVDs.  One right after another.  Ended last night with Episode 11 entitled “Hairography“.  I won’t bore you with all the detail, but the kids are doing a number from the musical “Hair” – complete with wigs and hair swooshes.  The idea is that if you swoosh your hair around enough, it distracts the viewers from the fact that your vocals and dancing aren’t that great.  It’s like cosmetic foundation covering over a pimple.

As I tucked myself into bed, I kept thinking, I wonder what is the “hairography” for presentations?  A snazzy slideshow?  A few canned jokes?  That story that you’ve told a few bazillion times?

In Glee, the teacher and the kids realized they didn’t need to hide behind the wigs.  Instead, they sat on the stage and sang from the heart.  Best version of True Colors I have heard.

Are you standing on the stage and speaking from the heart?