It’s Party Time at the Office! 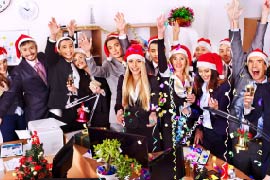 It’s that time of year when most people will be attending holiday parties. As well, many organizations will be hosting company celebrations for their staff after a long year of hard work, dedication and ongoing stress.

But, there are dangers of which every manager should be aware. Inevititibly there will likely be drinking, dancing and inhibitions will be down. This is the time when people become emotional and more open with their thoughts and feelings. So the risk of saying or doing something inappropriate increases.

Often the period of merry-making goes beyond the seasonal office bash. I do not want to spoil this important tradition, but as a manager there are hazards you should be aware of and protocols that should be taken to mitigate any negative fall-out from an otherwise positive and uplifting event.

There is data that shows office workers sometimes cannot keep their hands off each other, especially when dancing is involved. A recent British survey revealed that almost 30 per cent admitted to sleeping with a co-worker afterword. While another study by the dating site illicitencounters.com found that 60 per cent of party-goers admitted to inappropriate kissing at their seasonal bash.

Unfortunately, 50 per cent admitted they got carried away and made a fool of themselves in front of their bosses and staff. For some, drinking acts as a truth serum. The survey showed that 24 per cent told their boss exactly what they thought of them, while an equal number thought it would be a good time to suck up to gain favor.

Even more surprising is that 13 per cent admitted to inappropriately removing clothing, and many others said they had given someone information they regretted sharing afterwards.

Now there is another imminent danger — Social Media. The office party is also a time when people might be tempted to post inappropriate photos of coworkers that may later prove to be embarrassing. So, a small piece of advice — keep your clothes on and your phones off!

What can you, as a manager do to avoid regrets after an otherwise well meaning and important tradition?

Finally, as a manager, you should have plans in place to ensure your staff are not driving after a night of partying when they have been drinking. Ensure there are rides for those who need them and appoint someone who is abstaining to monitor guests as they are leaving.

I hope this will not discourage you from planning a fun-filled event where everyone can enjoy the celebration and look forward to an exciting year ahead. But, in the past I have just seen too many careers stalled and marriages jeopardized because of a critical decision made during an emotional moment in time.

On the positive side, studies show there have been a number of positive relationships formed at these parties which have resulted in wonderful long-term relationships and sometimes great marriages.

My question for managers this week: “What are your plans to ensure everyone can enjoy the office holiday celebration without risking careers, relationships, or other travelers on the road?”