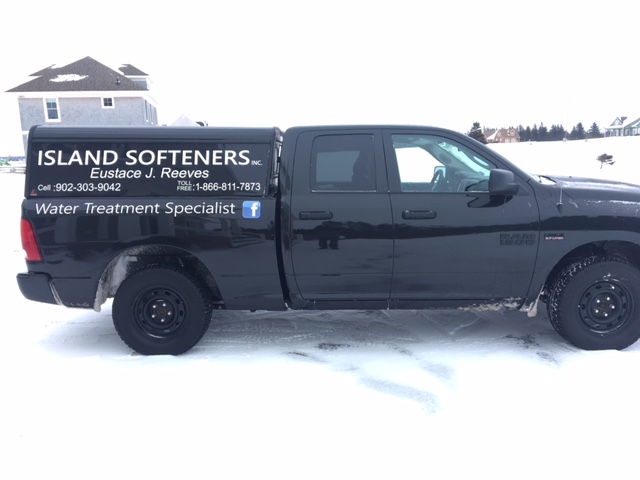 Many years ago I had a boss who said:

If you don’t truly like your customer, you will not have him for long.

And that is the philosophy that Eustace Reeves uses to run a successful business.

He developed that attitude when he was very young while working with his father in their booth at exhibitions and trade shows around PEI. In fact, what really pleased him the most was when he heard customers come by and say how they loved their water softener and how it changed their lives for the better.

They would comment on how much less soap they now used, how their skin problems had gone away, and how there were no more white spots around their sink. Some even said it made their eczema go away. Everything was now cleaner. It was through his father’s efforts and the family business that actually gave water conditioning products credibility in PEI.

His father started the business when Eustace was 14 years old. After finishing school, he spent some time working in the welding industry; however, the call of hearing those happy customers drew him back. He was proud to work with his dad, but after some time, he felt he wanted more sense of control over his own destiny. Eventually, he went on his own to start Island Softeners Ltd.

He says there are lots of water treatment equipment suppliers on the market of varying qualities. But, no matter the quality, if you service them properly and look after the customer well, you will keep them for life.

It was this attitude that also drove him to understand the actual mechanics of how these machines worked. Instead of just being an equipment or parts replacer, he learned how to strip them down, studied the specifications of each individual component and how they worked, then went on to refurbish them, making them work even more efficiently.

He has had many opportunities to source lower-cost products and parts from other vendors which would increase his profit margins, but that would not be in line with his value system or customer service philosophy. It would certainly not be what his customers have come to expect.

By operating in this manner, he is able to guarantee everything he does, which provides a sense of comfort and security for his clients.

Since many water conditioner products last a lifetime, there is not a lot of opportunity for repeat business. Gratefully, he finds that when those customers move, or their children grow up, they go back to him. This way, the business continues to grow.

One of his frustrations is that no matter how much he does to inform people ─ they find it hard to believe that by using a properly working water softener you can reduce soap usage by as much as 75 to 90%.

Most of his new business is by word-of-mouth and reputation. Nevertheless, he still sets up a booth in at least one trade show every year where he does pick up new customers. Doing this also brings back fond memories of where he got his start in the business.

At this time, he has no exit strategy but considers the possibility that in the future one of his children may be interested to continue the business, capitalizing on the Reeves brand.

My question to all leaders and entrepreneurs:

What would your business be like if you were able to keep every customer you ever had?

For valuable tips and strategies for building your own extraordinary team, subscribe to this monthly newsletter today.