The Great Resignation is quite real.  A new survey commissioned by Dr. Rumeet Billan, an expert on psychological capital, reveals that nearly half of American workers are considering leaving their current place of employment.

Those who are considering making a switch are less likely to feel a sense of belonging in their current workplace, which is most often associated with being treated fairly and respectfully – though belonging encompasses many more emotions.

“We have recently undergone life-altering challenges as a population, exposing the need for workplace cultures to be transformed,” said Dr. Billan. “More than 19 million American workers have quit their jobs since April 2021, disrupting businesses everywhere. Companies cannot afford to continue going through this type of employee turnover. It is important that we take the time to learn why this is happening and our recent findings suggest that workers place a high value on the very human and relational aspects of work.”

Employees cite fairness and respect as the top driver of belonging in the workplace, presenting the greatest opportunity for businesses and employers to create belonging in their organizations.

“Belonging is not a program or initiative, it is an experience related to social connectedness, feeling included, and being accepted,” said Dr. Billan. “It’s not just about inviting everyone to the proverbial table. What happens when they get there? Now, more than ever, companies and employers must take a more human-centered approach to how they support, communicate, and engage with their employees. Well-intentioned quick fixes can come across as transactional or virtue signaling when this is not complemented with the effort to strengthen relational ties.”

Belonging is a fundamental human motivation, and we are hardwired towards it. Employees are experiencing stress and burnout. They are seeking a renewed sense of purpose in their work and want connection with their colleagues and superiors. Failing to recognize and invest in creating experiences of belonging and failing to meet the demands of a changing workforce will continue to push workers out instead of pulling them in. 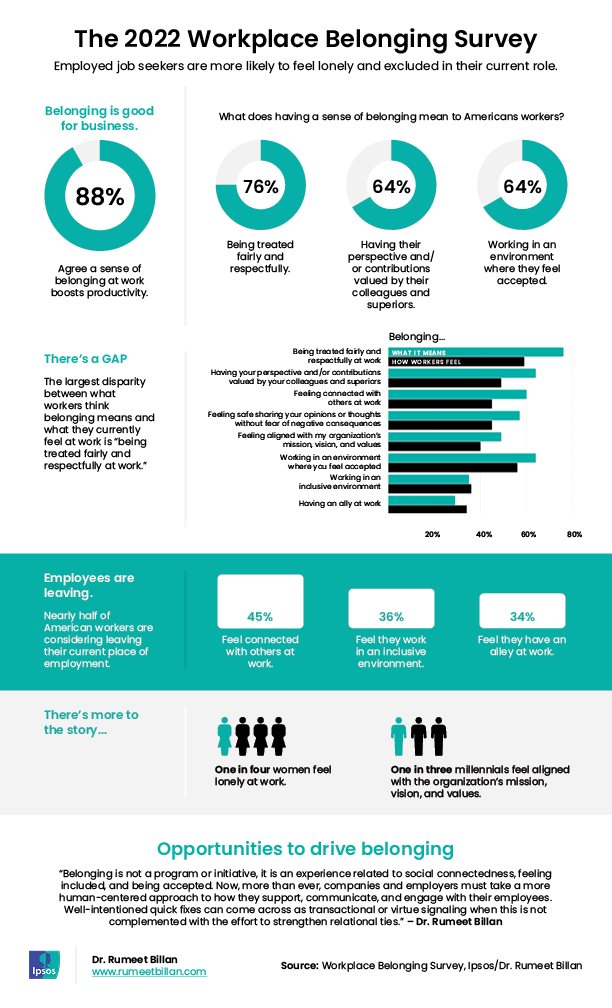 A HUGE thank you and shout out to my good friend and colleague Dr. Rumeet Billan for commissioning this survey and sharing it with me – so I could share it with you!

Photo by Hannah Busing on Unsplash

I’m a HUGE fan of the Heath Brothers’ work, so I jumped on Chip Heath and Karla Starr’s latest book, Making Numbers Count: The Art and Science of Communicating Numbers.   END_OF_DOCUMENT_TOKEN_TO_BE_REPLACED

Whenever I create an agenda for a meeting (virtual or in-person), I always seem to get pushback on the number of scheduled breaks during meetings.   I typically schedule breaks every 60-75 minutes – usually at an appropriate change of activity in the agenda – for 10 minutes. END_OF_DOCUMENT_TOKEN_TO_BE_REPLACED

Have you ever had a book arrive in your hands at just the right moment in time? Just when you need it? Many of us might be fumbling around trying to debrief 2021 and plan for a productive and positive 2022, all while traveling and wrapping up the holiday season.

Self-discipline Strategist Rory Vaden wrote this terrific book and I thought it was quite appropriate since I just set some new goals for the year! END_OF_DOCUMENT_TOKEN_TO_BE_REPLACED